The ‘DIRT’ on Underground Infrastructure

The ‘DIRT’ on Underground Infrastructure

Beneath our feet lie hundreds of thousands of kilometers of pipes carrying natural gas, oil and water, and buried lines connecting telecommunications and electricity to Canadian homes and businesses. The Common Ground Alliance (CGA) recently released its annual Damage Information Reporting Tool (DIRT) with a summary and analysis of the reported damages that occurred to underground infrastructure in Canada in 2017.

Across Canada, in 2017 there were 11,383 reported incidents of damage to underground facilities, 2764 of which were in Alberta. Besides the obvious cost of repairs, the damage caused disruption in services, evacuations, and deployment of emergency responders, adding up to an estimated national cost of $1 billion.

While the DIRT report lists the root cause of most Alberta incidents as unknown, it was able to determine that 303 damages were a result of no locate request being made and 505 caused by a locating issue. Clearly, there is a shared responsibility in the prevention of damage to underground infrastructure and its attendant safety risk.

The first line of defense is a notification to Alberta One-Call before any ground disturbance begins. In addition, Battle River Power Coop members must call the office at 1.877.428.3972 for locates past the meter as private lines are not included in the One-Call database.

The second step is the securement of reliable locates. Alberta One-Call notifies its member utilities when locate requests are made, and the various agencies mark their structures or otherwise notify the applicant as appropriate. This is a critical step and is only effective with agencies that are registered with Alberta One-Call. Registration in the database is voluntary at present, with the exceptions of the Alberta Energy Regulator and the National Energy Board-governed pipelines.

The proposed provincial legislation (Bill 211) was introduced in late 2018 in the Alberta Legislature and was referred to the Standing Committee on Resource Stewardship. The committee was instructed to prepare a report on the underground infrastructure notification system in Alberta including “recommendations for amendments to legislation to improve safety for excavators and to protect underground infrastructure”.

While underground structures remain out of sight and out of mind for most Canadians, the cost of damage to the system, both in dollars and in risk to the public, affects us all. 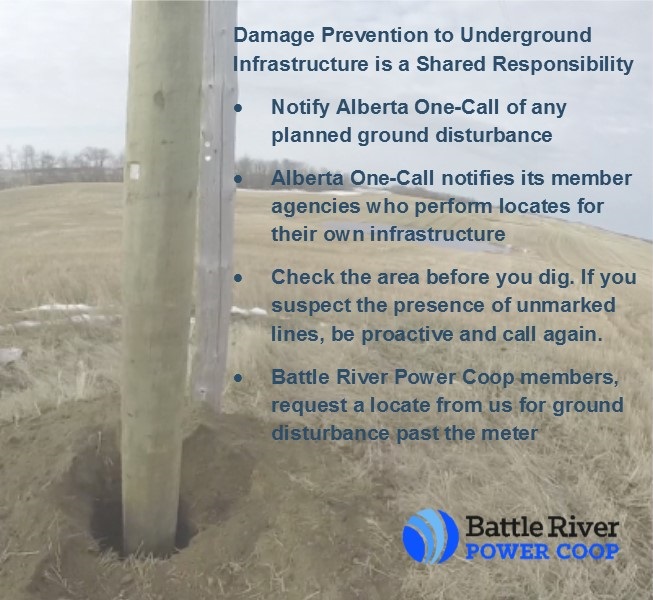