To understand Alberta’s electricity market, and the differences that exist here compared to other jurisdictions in Canada, a little history is helpful.

The Electric Utilities Act, enacted by the Alberta Government in 1996, deregulated the Alberta electricity market to a greater degree than anywhere else in Canada. The Alberta Electric System Operator (AESO) was created and charged with managing a system in which independent companies became responsible for electricity generation. The Alberta power pool became the vehicle for selling electricity to distribution utilities, at wholesale prices that are set hourly according to supply and demand.

In 2016, heeding cautions by the AESO that electrical generation may not keep pace with demand, the NDP government began a process to implement a capacity market, scheduled to come into effect by 2021. Capacity market means that electricity generators are paid for both the electricity they produce in real time and their ability, or capacity, to add electricity to the grid as needed. The stated reasons for implementing a capacity market included ensuring an adequate power supply and protecting consumers from price swings. Critics voiced concern about a potential increase in consumer cost, especially if capacity were to sit idle.

Energy Minister Sonya Savage stated on July 24, 2019 that, “conditions have changed substantially”, and the Government of Alberta will table legislation as soon as possible to stop the implementation of the capacity market. The decision follows consultations with industry and consumer groups and the Honourable Ms. Savage stated, “We heard from all stakeholders that an energy-only market provides more affordability and it’s a simpler structure.”

That means that Alberta will remain an energy-only market, in which generators are paid for the electricity they produce in real time, and at a fluctuating price. 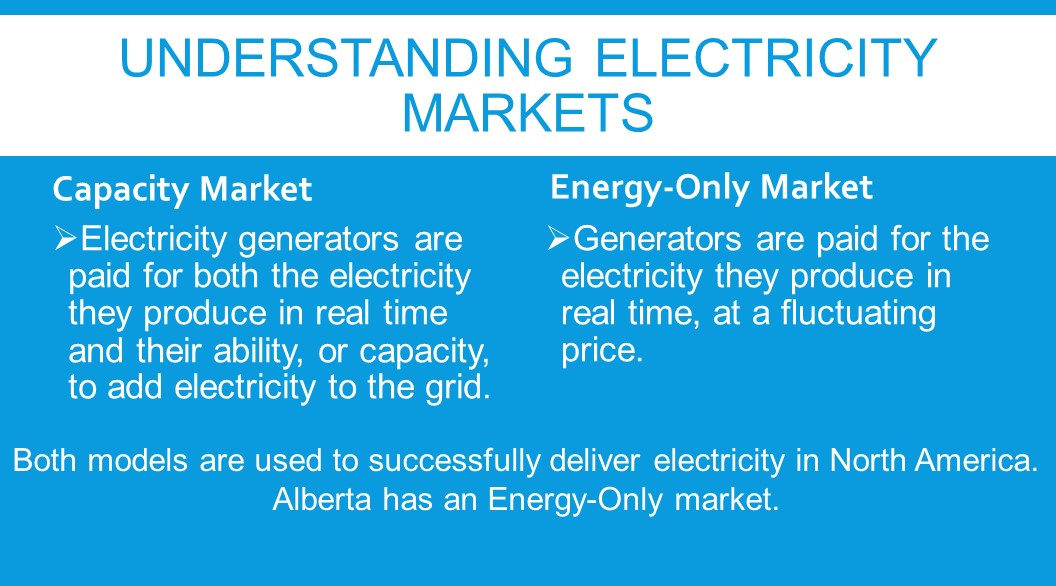