For two weeks in February, people around North America watched as Texas’s power grid (ERCOT) went offline due to the frigid Arctic air unaccustomed to our neighbours in the very south of the United States. It also had people wondering what happened and could the same thing happen to our power grids?

So, what exactly happened in Texas? The short answer is that “Texas ended up in the proverbial perfect storm of having both an extreme demand shock and correlated supply failures at the same time” (https://www.cbc.ca/news/canada/calgary/texas-power-outages-alberta-1.5917052).

In Alberta, the Alberta Electric System Operator (AESO) is similar to ERCOT in Texas; they are responsible for the balancing of supply and demand of electricity and keep the grid running 24/7. “Throughout Alberta, 26,000 km of transmission lines bring power to over four million people” (https://www.aeso.ca/aeso/about-the-aeso/). They work with transmission facility owners, generators, and retailers to ensure the system has enough power for demand.

Last month, Alberta was seeing record highs reaching upwards of 40 degrees Celsius for several days in a row. The AESO issued a Level 2 Energy Emergency Alert because the province was using reserves to balance the power system. In short, people were using more power to run air conditioners, fans, etc. for longer periods of time, which stretched the supply; luckily for Alberta, demand was still being met and we only dipped into our reserves. AESO pleaded with Albertans to conserve energy, especially between 4:00pm and 7:00pm.

Battle River Power Coop has some tips for our members with air conditioners on how to help conserve energy.

With ever-changing weather – colder winters and hotter summers in places that normally do not get such extreme temperatures in either season – grids built to meet their respective seasonal peaks need to be prepared for extreme weather at all times of the year and energy consumers need to use energy efficiently to survive in sweltering or frigid weather. 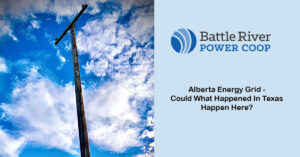