According to statistics published by the Government of Alberta, more than half of collisions on rural highways involve an animal, either wild or domestic. The most frequently reported collisions are with large animals, deer accounting for 85%. These incidents happen year-round, day or night, although more frequently in October through January and between the hours of 7 pm and 11 pm. There is an annual spike in November, coinciding with hunting season and the animals’ mating season.

Avoiding a crash with an animal is a real challenge. They often appear suddenly from cover and jump onto roads without warning. Nevertheless, there are precautions that drivers can take to avoid a collision.

Slow down in areas where you have observed wildlife in the past, and in areas marked by roadway signs indicating frequent wildlife crossings. A driver travelling at high speed has a longer stopping distance, greater force at impact, and a higher potential for injury or fatality.

Stay vigilant. Leave the phone alone and focus exclusively on driving. Scan ditches and the road ahead for movement and/or eyes reflecting in your headlights. (Note: moose eyes do not reflect light). Interruptions in light coming to you from the headlights of oncoming traffic or from reflective roadside markers can be an indication that wildlife is crossing the road. Be especially cautious at dawn and dusk when animals are hard to see and when they are most commonly on the move.

If you see one deer, watch for more. They often travel in herds, and their behavior is unpredictable.

Don’t litter. Food scraps or other trash make the roadway attractive to a wide variety of wildlife, including smaller animals and birds. Incidents involving skunks, porcupines, raptors, etc. are frequent, although these are less often reported. 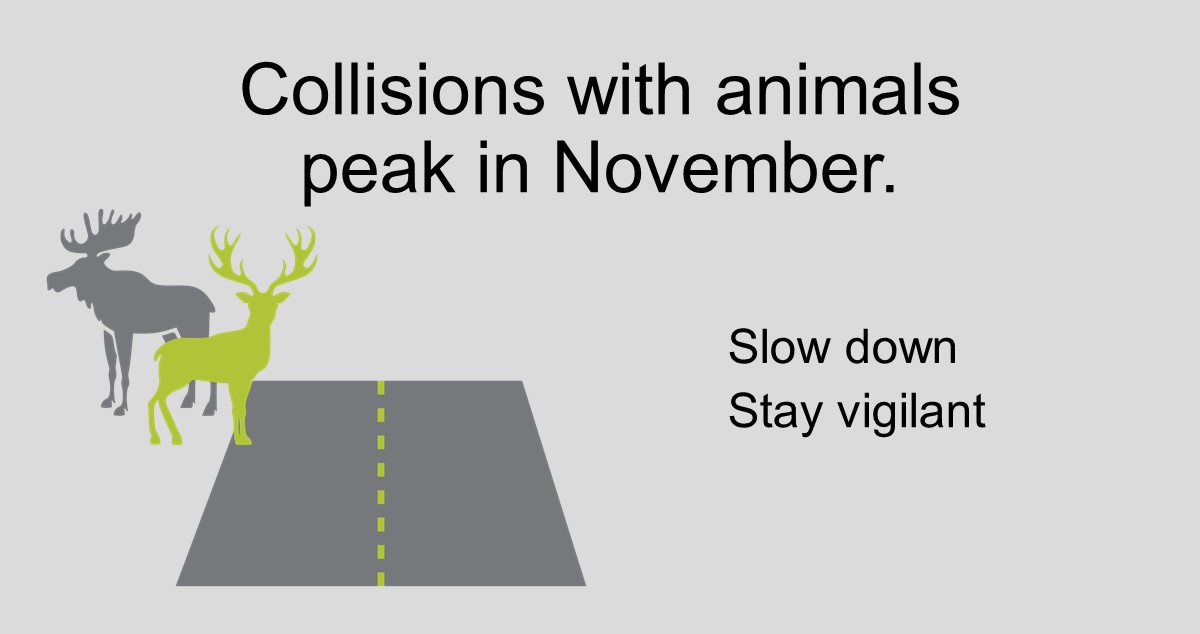