In June 2019, Battle River Power Coop will celebrate its 70th anniversary. It is a time to reflect on the past, innovate in the present and plan for the future.

Battle River Power Coop’s history is a story of innovation, paralleling the changes in the rural areas that we serve. When powerlines began to spread across the province in the late 1940’s, a typical Alberta farm was ¼ or ½ section, and farm equipment, while modern for the time, was simpler and smaller than it is now. Farmers succeeded by adapting to new conditions, embracing new products and technology, and often by expanding.

This scenario is echoed in the development and progress of Battle River Power Coop. Directors in the 1990’s envisioned greater efficiently and increased services to members through the creation of a larger organization. To that end 5 local Rural Electrification Associations (REAs) made the decision to amalgamate. They adopted the Battle River name because the river passes through all 5 of these REAs. Subsequent amalgamations increased the member base further, and Battle River became self-operating in 1999. Self-operation means that the organization looks after its own construction, maintenance, service and office administration rather than employing outside companies to perform these tasks. It is comparable to farmers who prefer to harvest their own crops as opposed to hiring someone else to do it. Since becoming self-operating, we enhanced member services that include Vegetation Management, System Planning and Design, and Electrician Service.

Looking to the future, it is expected that rural Alberta will continue to advance, and rural Albertans, including Battle River Power Coop, will continue to adapt. The trend toward more residential, industrial and business subdivisions on rural land is likely to continue, and residential acreages will be a choice for Albertans who prefer to live in rural areas. Battle River Power Coop has the expertise, equipment and technological proficiency to successfully operate in this ever-changing landscape. We approach our 70th Anniversary looking forward to ongoing success as an electricity distributer in central Alberta, providing safe, reliable, cost-effective power to all our rural members. 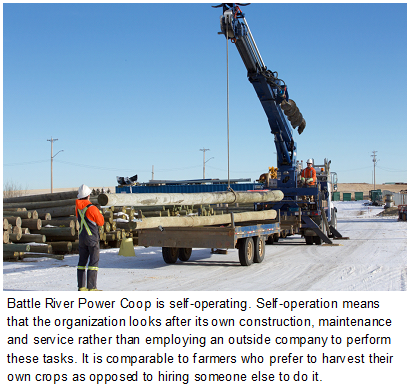