Directors are Essential to Your Coop

Directors are Essential to Your Coop

When we think of the history of Rural Electrification Associations (REAs) in Alberta, our attention is often drawn to the hard work of the farmers who worked on powerline crews to put in their own electricity. Indeed, we celebrate the determination, time and money that went into putting up the poles and lines that brought electricity to Alberta farms.

An element of this process that is easily forgotten is the work done by REA Directors. Before work began on construction of the rural powerlines, REAs were required to incorporate under the Cooperative Associations Act. The book, Country Power, by Frank and John Dolphin (1993), lists four bodies that REAs were obliged to work with after incorporation:

Country Power does not tell us whether the people who accomplished these tasks were elected Directors, or simply stepped up as volunteers. Nonetheless, they clearly did work that would now be shared by Boards of Directors and General Managers.

Throughout REA history and specifically through Battle River Power Coop’s metamorphosis into a modern, fully operational electricity coop, directors have continuously played an essential role. Battle River Power Coop owes its very existence to Directors of local REAs who saw the benefits of amalgamation. These far-sighted individuals understood that they could offer members better service and economy of scale would if they worked together as a larger entity. Amalgamations led to Battle River becoming self-operating in 1999, and services have expanded since then to include Vegetation Management, System Planning and Design and Electrician Services, among others.

Battle River Power Coop is fortunate to have attracted dedicated, well-qualified individuals with diverse backgrounds who are willing to serve on the Board of Directors. We are doubly fortunate that these Directors live in various parts of our service area, thus bringing to the table questions, opinions and viewpoints from many communities.

Battle River Power Coop is once again recruiting nominees in advance of the Annual General Meeting to be held in June. Directorship is an exciting, challenging and rewarding opportunity to serve your community. All Battle River Power Coop members over the age of 18 and in good standing are eligible for nomination. You can pick up an information package at the office or contact us and ask for one through the mail. 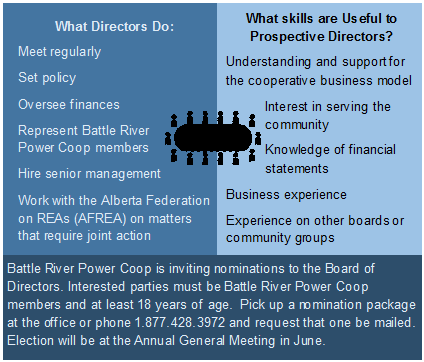