Hurricane Response – The Power of Cooperation Among Cooperatives

Hurricane Response – The Power of Cooperation Among Cooperatives

Cooperative power distribution in Canada is unique to Alberta. In the rural United States, it is the norm. There are more than 900 electric coops serving over 40 million Americans in 47 states, making them the primary means of rural power distribution.

During and after recent hurricanes, electric coops all over the southeastern US gave an exemplary demonstration of how cooperatives solve challenges together. In the days before Florence made landfall, coops in the region began preparations to divert resources to areas in the path of the storm. “We have a network of cooperatives across the country that will spring into action and help a fellow coop during emergencies and times of crisis,” said Harry Reeves, vice president of training, education and safety for Georgia Electric Membership Corp. “We have an unwritten agreement that says if we’re in trouble, they help us. In return, we help them.”

They followed through. Following Florence, coops from a dozen states sent lineworkers, vegetation crews, skilled technicians and hundreds of pieces of equipment to the Carolinas in a united effort to restore power. The influx of people presented its own challenges. They required food and lodging and local experts who knew which roads were passable. Rain fell in unimaginable quantities for five days, causing more damage than the high winds. Uprooted and fallen trees and other debris often had to be removed before power structures could be replaced or repaired. One press release called it a “ballet”, as hundreds of people worked in different locations at different tasks, each requiring their individual compliment of equipment, poles, and other supplies.

Florence struck on September 14 and over the next few days more than 1.1 million people lost power. Ten days later, ABC News reported that only 4,534 outages remained in North Carolina, a remarkable testament to the hard work and dedication of everyone involved in the restoration effort. A similar response is in progress as electric coops meet the challenges of Hurricane Michael.

Returning our attention to Alberta, would electric coops work together here if a similar situation occurred? While we sincerely hope that we never have to cope with destruction on the scale of Florence or Michael, there are mutual aid agreements between electrical coops in Alberta. Plans are in place should they be required in response to a regional emergency. 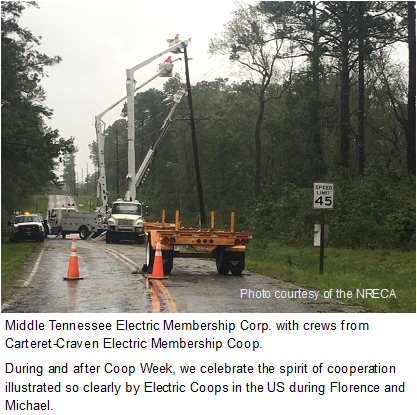