How Electricity Came to Rural Alberta

How Electricity Came to Rural Alberta 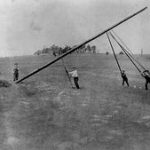 Rural Electrification – one pole at a time.

Today, it is hard to imagine life when homework was done by the light of coal oil lamps, water was pumped by hand and cooking was done on a wood stove. Only 70 years ago, this was life on most Alberta farms.

Electrification was a surprisingly controversial issue in the 1940s. Like a hot potato, it was tossed from the Alberta Government to the Investor Owned Utilities (IOUs) and finally to the farming community. The question, “Who will build the power grid in rural Alberta?” was finally answered in 1948 with a provincial decision to make Rural Electrification Associations (REAs) the vehicle for rural electrification.

The cooperative business model was by then a tried and true alternative to privately owned companies. In addition, REAs were already established in the rural United States, and Albertans could follow the American example, specific to the electrical industry. In accordance with the Seven Cooperative Principles, farmers formed local groups and elected Boards of Directors. Members joined voluntarily and contributed startup cash. Farmers borrowed from the Provincial Government for further financing and sought out the technical expertise they needed. Many farmers traded labour for credit on their debt.

The work was arduous. Equipment commonly in use today was scarce or unknown, and everything from loading poles to digging holes to stringing line was often done by hand. Summer and winter, over unpaved roads, through brush and around sloughs, the rural power grid went up.

Alberta was the only province in Canada where rural residents successfully used REAs as a means of rural electrification. Like the rural communities they serve, present day REAs continue to evolve and progress. Your own Battle River Power Coop is an REA in central Alberta providing safe, reliable, cost effective power distribution, 68 years and counting.